IT-Fusion was founded in 2005. Specialized in offering software solutions and computing services in the field of General insurance and medical insurance. It developed reliable highly specialized & customized insurance engines that drove IT-Fusion to be highly recognized by leading industry clients.

History: In 2005-2008 Company was founded- under name of Meaprom-by four partners: Paul Haddad: Current Owner of an Insurance Brokerage, owned 51% of Shares. Hamed Mabrouk: Managing Director of Leading Insurance Brokerage, owned 30% of Shares. Mostafa Medhat: Application delivery manager of the Central Bank of Egypt & Egyptian Bank Company, software developer at IBM, held IT management and application design position in major insurance company. Currently CEO of IT-Fusion Software House: Owned 14% of Shares Mohamed Assem: Moved from academic career after gaining his master s degree in Automated testing of software GUI, Certified Business Analyst Professional CBAP, Worked as VP for professional development of IIBA Cairo chapter. Currently Deputy Manager of IT-Fusion: Owned 7% of Shares And together they formed a strong corner stone for the utilization of expertise and knowledge, combined by the know how to create the needed specialized solution development, as they founded a limited liability company under the name of Meaprom, to serve merely insurance companies and solve their struggles in the IT field and Application Software. Along with the business need to customize solutions in order to meet the level of variances between insurance providers. But soon the company was mature beyond the limitation of serving only the group of companies of those with the highest Shareholder's equity. This is when the latter mentioned partners Mostafa Medhat & Mohamed Assem decided to procure the company with allocated equity of 75% to 25%. After 2009, the new management was radiating their readiness to serve all insurance companies unrestrictedly. Also to match the new identified vision and mission statement, they decided to change the name of the company from Meaprom to IT-Fusion , to distinguish themselves from the original positioning, as the customers were still under the impression that Meaprom is exclusively dealing with only the previously mentioned group of companies.The company grew rapidly as it developed new applications and released new versions of the pre-developed ones, which led to, not only, maintaining existing clientele but it significantly expanded, due to clientele increase, with a profit breakthrough, as the new board of directors had sought. 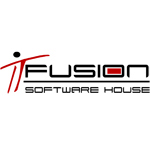