The Egyptian Engineering Agencies EEA is an Egyptian engineering and automotive supplies company established in 1941 in Cairo by Robert Dayoub, still current President of the company.

The firm began as an importer & distributor of industrial goods for the metal and wood industry. By the 1950s the firm had ventured into other operations including water works, automotive service equipment, and distributing raw materials as supplies for industries in Egypt.

In 1976, Dayoub’s three sons – two of them trained mechanical engineers joined the company and expanded its activities. They developed the company into five key areas of production including wood-working machinery, chemicals, automotive service equipment, machine tools and utilities .

To further establish its strength in the Egyptian market, EEA has undergone a transition in legal status from a limited proprietorship, to a joint stock company but still centering on the same industrial activity within the market.

The Egyptian government and NGO's have recently started a public awareness campaign about emissions and as a result changes to traffic laws have been made to enforce emission testing for vehicles and to decrease emissions. Egyptian Companies such as the Egyptian Engineering Agencies are now importing gas analyzers and smoke meters for the government of Egypt. 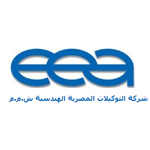